This year’s Rechtsgeschichte is flying under the flag of translation. The first Focus section deals with cultural translators of normativity, and the second Focus treats the translation of legal customs into writing – a translation into another medium. Such processes of translation may very well represent a key to understanding local, national, regional, or even global legal histories; however, in the past they have simply received insufficient consideration. In order to rectify this situation, the Max Planck Institute for European Legal History has for quite some time, within the context of a research focus area, been devoting more attention to such processes. For this reason, the contributions brought together by Lena Foljanty in the first Focus section, Translators: Mediators of Legal Transfers, stem predominantly from research projects being conducted at the institute. The contributions are looking at early modern Mexico, Helmstedt in the 18th century, Cairo in the 19th century, and Colombia in the 20th century. Another act of translation, in multiple senses of the term, lies at the heart of the second Focus section. Tzung-Mou Wu, from Taiwan, asked a group of legal historians from the Western world to examine historical experiences involving the codification of legal customs, thereby setting the stage for a Taiwanese reflection on the question as to how to make the most of the so-called indigenous peoples’ legal customs and customary law. At first glance, this approach may appear somewhat peculiar or perhaps remind us of the unfortunate attempts to directly appropriate legal history so as to shape law in the future. Nevertheless, abusus non tollit usum and the multiplicity of recourses to history certainly belong to the more interesting phenomena within the contemporary debate concerning the rights of the so-called indigenous peoples. The contributors, however, were faced with the difficult task of translating the major questions of legal historical scholarship in such a way as to be interesting for the jurists in that region, which, despite some historical points of contact, nevertheless possess very different legal cultural experiences. The demand for such texts is greater than ever and will only continue to grow in the future.

In his introductory remarks, Tzung-Mou Wu makes reference to another aspect that our discipline needs to deal with: the danger that, given the growing Anglicization of the academic discourse, the results of the important research traditions composed in the major European languages are receiving less and less consideration. This situation further emphasizes the necessity of translation; something we are attempting to do in this issue. To this end, we are publishing a comprehensive essay by Gerhard Dilcher in English, where he takes stock of his decade-long engagement with the German literature scholars and their relationship to the Historical School. In this contribution he sketches out what some readers might consider an unfamiliar image of the history of 19th century German legal historical scholarship. A number of very well-known and important jurists from the 19th and 20th centuries, some of whom are seldomly read today, are inscribed within the developmental trajectory that stretches from von Savigny to Berman. Not least because of the apparent disappearance of German literature after 1945, a great number of these figures have moved beyond the periphery of both legal historiography and legal historical reflection. Several of the portraits found in this issue are intended to help recall them. In his treatment of the Austrägalgerichtsbarkeit in the German Confederation, Jakob Zollmann also takes up and works through an important part of 19th century German legal history. His analysis sheds light on an almost forgotten legal historical phenomenon; a topic which is of particular interest given the overlap existing between various jurisdictional spheres. Finally, Pedro Cardim addresses the expansive and fundamental field of research within legal history focusing on European empires: the status of the overseas territories of the Iberian monarchy in the 16th and 17th centuries. Over the course of the last 100 years, their political and legal status was primarily analyzed from a national perspective – either in Europe or America. His article reconstructs this imperial legal space and provides a thoroughly altered picture – one little known within the context of the English-language literature.

The two Forum sections strive to provide a snapshot of a broad discussion concerning issues important to legal historical research. Christiane Birr poses the following question: what kind of | research results can be expected from the much-discussed digital humanities? Going beyond the common rhetoric, are there any concrete uses or results relevant to the humanities and, in particular, to legal historical research? – The responses to these questions include everything from fundamental reflections regarding methodological implications up to and including very specific results and how the applications of the new technologies could lead to further results. In the second Forum, Peter Collin approached several colleagues and asked them to assess the state of the history of social law. Here again we are dealing with a field that was for a long time described in terms of national histories and, as the contributions show, could profit from a broadening of perspectives via comparative or interrelational approaches.

In the Critique section, important works within legal historical research published within the last two years are discussed, several of which also deal with translation. As always, we have again done our best to discuss as many publications as possible in a language other than that in which they were written. Journals are indeed also translators. 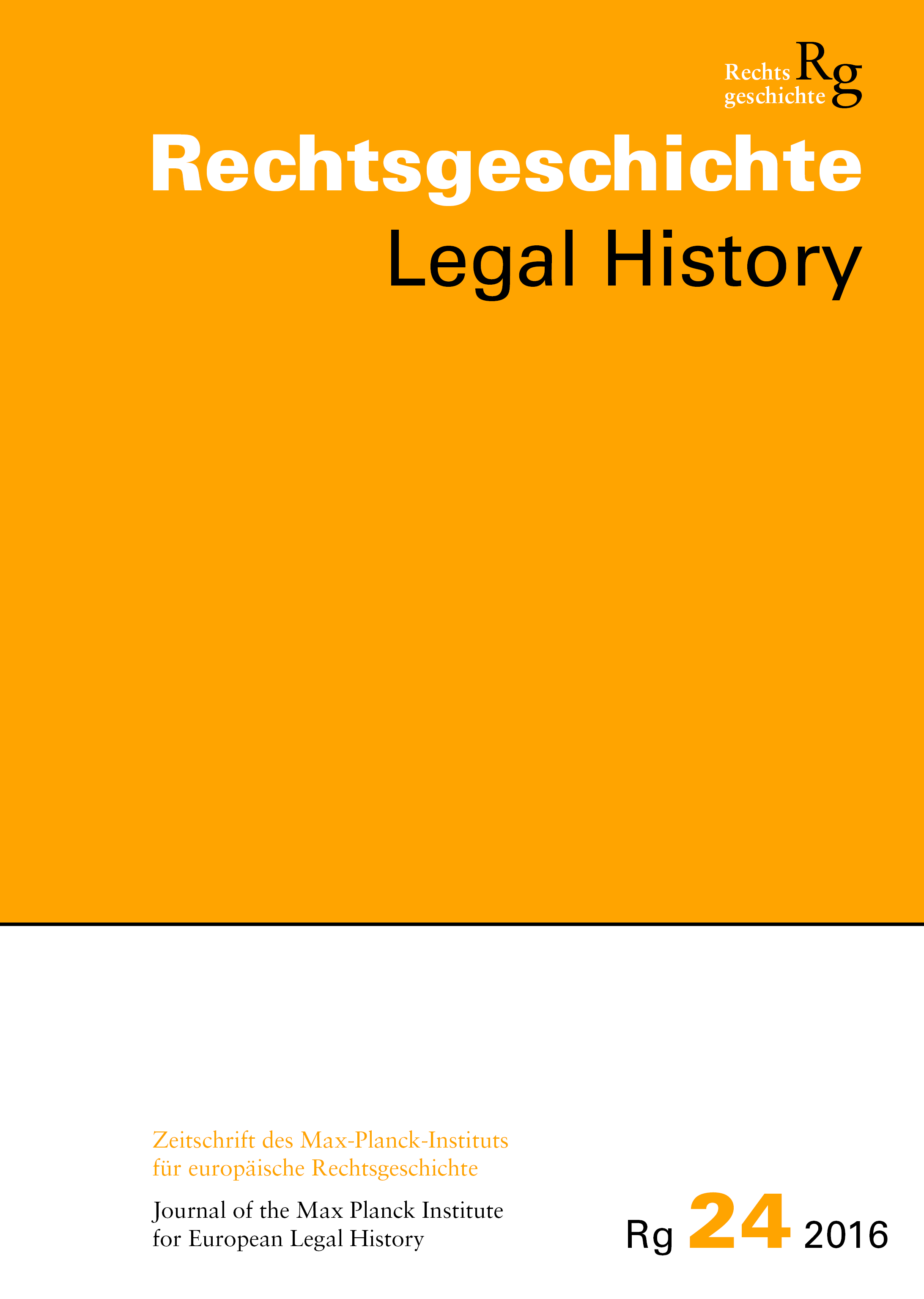 The Germanists and the Historical School of Law: German Legal Science between Romanticism, Realism, and Rationalization

Austrägalgerichtsbarkeit – Interstate Dispute Settlement in a Confederate Arrangement, 1815 to 1866

Political Status and Identity: Debating the Status of American Territories across the Sixteenth and Seventeenth Century Iberian World